READ THE LATEST NEWS ABOUT AEGIS
Back To News

Success at the IMechE Railway Challenge 2017

Organised by the Railway Division of the Institution of Mechanical Engineers, the annual Railway Challenge, held between June 29th and July 2nd took place at Stapleford Miniature Railway in Leicestershire.

Our Project Engineer Bing Yan has been working in collaboration with a team from the University of Birmingham to create a 5th generation hydrogen fuelled rail vehicle entry into the competition.

Bing held a kick off meeting for his team in January of this year.  Impressively he had just landed after a 16 hour flight from China, where he had been visiting family for the Christmas holiday. He stepped off his flight and straight into the kick off meeting at 10:00 on a rather cold and dark January morning.

Whilst Bing headed up the project, the team also had the expertise of 2 PHD students, 3 Undergraduates and 2 Civil Engineer Students, who were visiting from the University of North Carolina, US; as well as the expert help from AEGIS’ Engineering Director Chris Hoare who helped with project management, Traction Specialist James Johnson and the design skills of Mechanical Engineers Christopher Beales and Sylwester Sulkowski.

The team took an innovative approach to their competition entry with the design of a Hydrogen fuelled vehicle. With the hope of standing out from other entries, who in the past have opted for more conventional petrol generator power sources.

Always thinking of future proofing, the Hydrogen fuel cell powered locomotive was designed as an attractive candidate for future railway solutions due to its high efficiency and competitive edge to other alternative fuel sources as it is emission free at the point of use.  Combined with a supercapacitor, the hydrogen cell powered locomotive creates high power with a fast dynamic response, highlighting its suitability for this kind of application.  Not only does this reduce the stress on the fuel cell, it also brings with it the economic benefit of cost saving on the fuel cell capacity hence reducing initial investment on the whole train.

Although tested live on the competition weekend, the AEGIS team gave a sneak preview of their entry at Birmingham University’s recent open day. Prior to this though, the AEGIS team attracted media attention from Channel 4 who chose to film the locomotive for a documentary that will be aired in November. A date was arranged and the film crew arrived to undertake a day of filming. 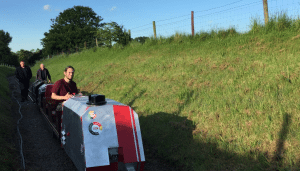 Following the Channel 4 filming, during the University open day, our Locomotive gave rides to over 700 enthusiastic passengers along a 50m specially assembled track.  At one stage, people were waiting for 15mins-20mins to get on the train, and the queue was longer than the track! Passengers were more than satisfied with their transport for the day and to top it off, all journeys were made on time with no delays. 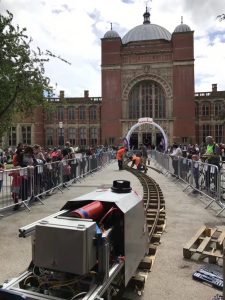 There is a busy commuter route that runs between University station, Birmingham and Birmingham New Street. We had to make a cheeky announcement to name ourselves the “Real” University Station.

So, the Railway Challenge finally arrived on June 29th and the team were more than ready to showcase their locomotive, having full confidence that it would perform on the day.  The Railway Challenge is a fantastic opportunity for our engineering experts to compete against industry peers and showcase their engineering know-how and aptness in a fun environment, although this didn’t detract from the team’s competitive nature and burning desire to come out on top! 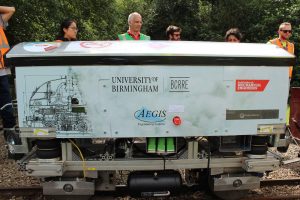 Governed by stringent competition rules our team rose to the challenge of designing and building a miniature 10 1/4″ gauge railway locomotive, with fantastic results.

The locomotive was built to challenge the other 11 competitors on several different aspects, these were: 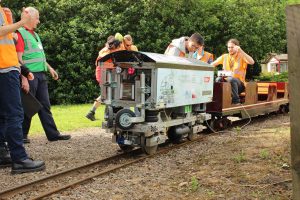 winning three of the categories. Bing and his team were thrilled to have achieved first place in the Energy Storage Challenge, Innovation Challenge and joint winner of the Reliability Challenge, showing that all of their hard work had paid off.  The choice of an innovative, leading edge Hydrogen fuelled locomotive highlighted the potential that this type of engine has in the market place, helping to pave the way for Hydrogen Fuel-cell technology.

Although quite rightly thrilled with a 2nd place result, Bing has already started planning for next year, determined to get all the way to the top in the Railway Challenge 2018.